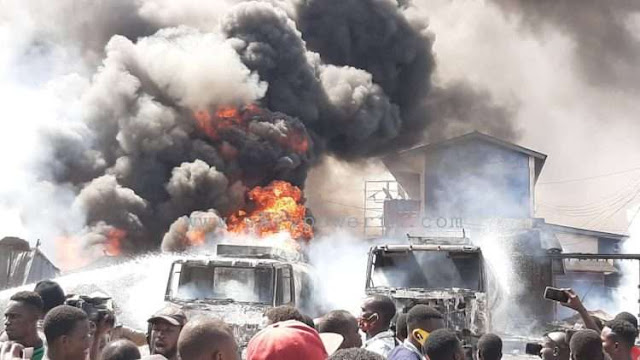 A 2-year-old boy lost his life after fire gutted two tanker trucks and about a dozen container shops at “Aben be bom” (Apremdo market) near Kwesimintsim in the Effia Kwesimintsim constituency of the Western Region on Wednesday.
An eyewitness account indicates that a taxi which was being repaired in the vicinity caught fire and spread to the two diesel tankers which were stationed behind the Apremdo filling station. The tankers exploded burning about a dozen container shops in the area.

The two year old boy who was sleeping in one of the containers, according to eyewitnesses, got burned beyond recognition whilst the mother, a mobile money vendor sustained some burns in an attempt to save the son.

Eyewitnesses say personnel from the Ghana Fire Service arrived about 15 minutes to the scene after the fire started.