Cristiano Ronaldo couldn't be stopped on Tuesday as he continues to prove that he's the best in the world. The Juventus forward scored four goals in a 5:1 win over Lithuania in the 2020 Euro qualifiers. 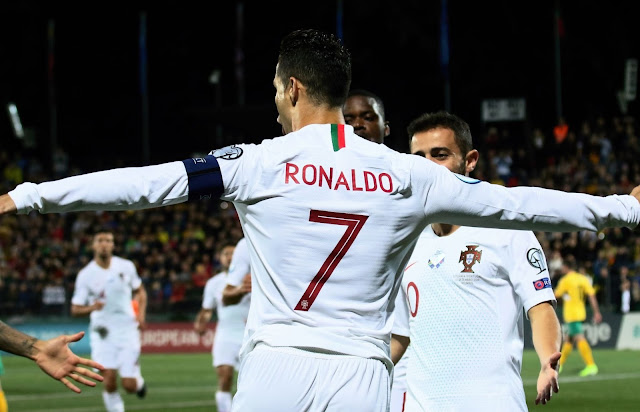 Cristiano Ronaldo couldn't be stopped on Tuesday as he continues to prove that he's the best in the world.

The Juventus forward scored four goals (7, 61, 65, 76 minutes respectively) in a game for the 10th time in his career as he lead Portugal to a 5:1 win over Lithuania in the 2020 Euro qualifiers.

He has now scored a total of 93 goals for his country, which is more than any other player in European history.

Ronaldo, 34, playing in his 160th international, notched his eighth hat-trick for his country and the 54th of his career to secure all three points for his team.

His quadruple takes him closer to becoming the all time international goalscorer. He's just 17 away from overtaking Iran's Ali Daei.

It was a record breaking day for the Portuguese star as he marks 24th goal in European qualifier for his nation, breaking Ireland legend, Robbie Keane who had 23 goals in euro qualifiers.

Despite his personal achievements, Ronaldo insists he was happy for the team's victory and stated that the team did very well.

Portugal is now second and eight points behind leaders, Ukraine. However, they do have a game in hand.

"I'm having a good time, but the team was doing very well too," the 34-year-old told reporters.

"I am happy and enjoying this moment, not because I scored the goals, but because of the level we have been able to demonstrate in recent years.

"It is up to me to continue helping the national team."

"The hardest thing was winning in Serbia, and it was important to continue with a triumph here," added the forward.

"We are closer, we have two games – one at home and one away – and I think if we win one of those matches it's enough."