Nigerien man who climbed plane about to take off, deported by Nigerian government (Photos)

Bold Nerds 23 August 0 Comment 23 August
Usman Adamu, a Nigerien man that made headlines after hanging on to the wing of an Azman aircraft that was preparing to take off from Lagos to Port Harcourt, has been deported to his country. 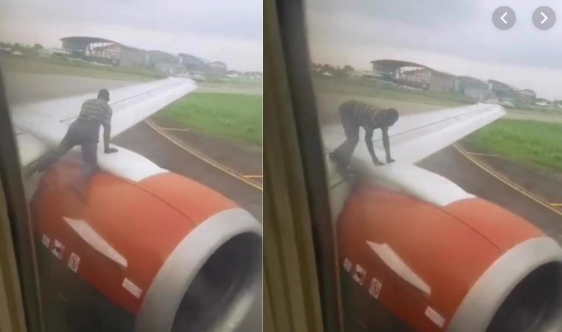 The Nigerien at the center of the July 19 stowaway incident at the restricted area of the Murtala Muhammed International Airport (MMIA), was found to be mentally imbalanced after he was interrogated, profiled and subjected to psychiatric tests by the Nigeria Immigration Service (NIS). Usman was deported by road on Friday August 16, through Lagos.


Immediately he was arrested at the airport, bysecurity agencies, he was interrogated and asked series of questions, and later taken to the psychiatric hospital for a test. It was at the hospital that it was confirmed that he had a mental challenge.

But despite that, he was still kept in detention for another round of questioning, which didn’t produce any meaningful result. So, he was handed over to us and as the law required, we returned him to his country" an Immigration source told Sahara Reporters.