Homeowner is facing prosecution for theft for donating footballs kicked into her property to charity. 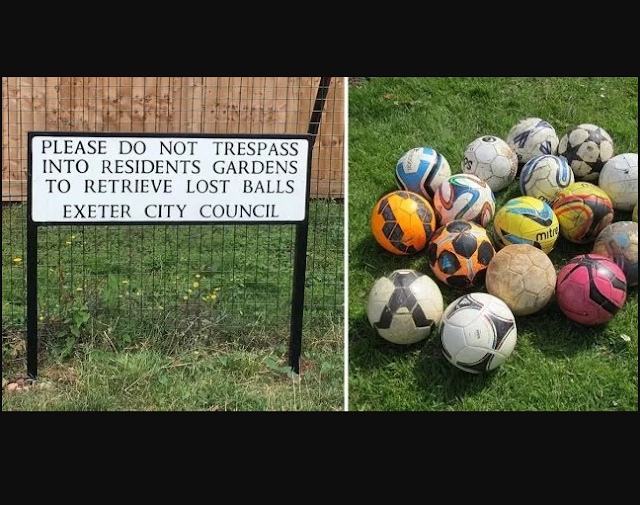 A homeowner is facing prosecution for theft for donating footballs kicked into her property to charity.

56-year-old Anny Kilbourne whose home is situated at the back of the Bettysmead playing fields in Exeter, Devon, claims that the chairman of the Exeter Panthers Chris Leisk, who is a police officer refused to apologise when a stray ball hit her in the face.

In retaliation, she decided to keep any balls kicked over her fence and donate them to charity.

Now Ms. Kilbourne is reportedly being 'harassed' by officials for the cost of the balls.


I'm an old woman who has always had a deep-seated respect for the police and the job they do, but now I find myself being harassed by them, in a situation in which I believe they shouldn't even be involved.'

'The police have since been hounding me. It has reached the point where I'm scared to open my door or answer the phone.

'On Friday, July 12, I was rung by an officer who refused to get off the phone until I agreed then and there, to pay up. She reduced me to tears.

'Last Thursday I had five calls to both my landline and my mobile starting shortly after 8am.

'Then I received text message, insisting I contact the police as soon as possible.'

The following day she says the phone started ringing again at 8am and there was a second call within minutes, then a voice message was left at the third call by the police, again insisting she gets in touch. 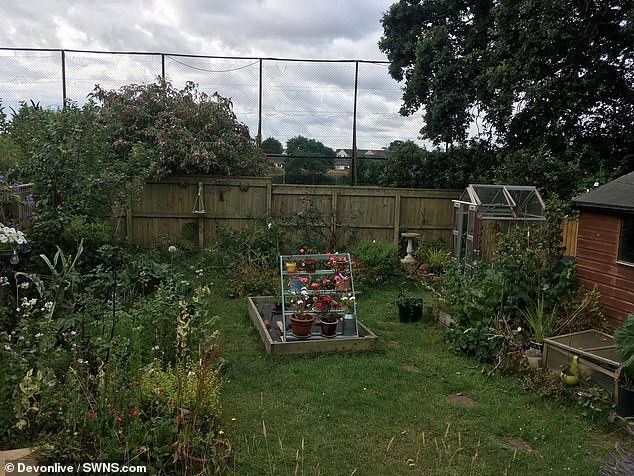 
Surely the civilised line is to stop trying to get money from me - the victim - and for all parties to sit down and work, with mutual respect, on a way to prevent this situation re-occurring?

'I have said I'm happy to discuss a future plan for ball recovery with the club but nothing less than a cash payment will suffice.


Today I have had a hand-delivered letter insisting I attend an "interview" at the police station on August 8.

If I fail to attend, or, presumably, if I continue to decline to give money to the football club, I will be arrested. I'm very badly scared now.

'It does look as if I am going to be arrested because while I'm keen to meet with the club and set up an arrangement to prevent this happening again, I simply will not give them money for balls which came onto my property uninvited and which caused me physical injury.'

The Team supervisor, Mr. Leisk, who is a police officer, said: 'Exeter Panthers is a not-for-profit organisation that runs to the benefit of over 130 children and is run by around 25 volunteers.

We are fully affiliated with the Devon FA and have insurance policies for all aspects of football liability.

'Earlier this year a local resident approached the chairman of the club after a game as two balls had gone into her garden during the game.

'Our chairman was very apologetic about the situation and offered to provide the resident with all the relevant details of the insurance policies so that she could claim for any damage that had occurred.

'The resident declined this stating there was no damage and at no point was an injury mentioned.

'The chairman, who has been involved in the club for over eight years, explained that this was the first time this has happened in his time at the club as the five meter high fence normally provides sufficient protection.

'The resident was dismissive of the apology and refused when asked to return the balls.

'She was advised that she had no legal right to withhold the balls and in doing so would commit the offence of theft but continued to refuse to return them.

'She was advised the club would have to refer it to the police for the balls to be returned.

'The resident provided her name and address to the chairman to allow the club to do so.

'The club is now aware the resident has disposed of them prior to the police speaking to her.

'The police have asked the club's views on any form of action they may take and the club have confirmed they feel that it is only right for the resident to compensate the club for the £26 for the cost of the balls.' 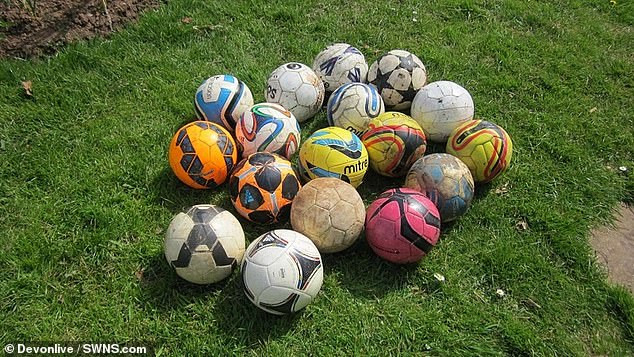 A spokesperson for Devon and Cornwall Police said:


Police were contacted via 101 with reports of a theft of footballs from a local youth club that had taken place following an incident in Betty's Mead, Exeter, in April.

'While officers met with Ms Kilbourne, she raised concerns in relation to previous anti-social behaviour going back years linked to footballs being kicked into her garden and damaging her property; at no time previously had Ms Kilbourne been in touch with the police in relation to these matters.

'The neighbourhood team leader for Exeter made the promise to Ms Kilbourne that a local PCSO would work with and support her in relation to these matters, and would help liaise with the local council to see if a solution could be found.

Ms Kilbourne has since refused to engage with police on this matter, despite numerous attempts to reach out to her and to find a solution.


'In relation to the allegation linked to the theft of the footballs from the youth club; due to this being part of a live and active investigation we are unable to comment specifically on this matter at this time, although we continue to work with both parties to find a resolution that pleases all.'