Student grabs teacher's wig in class, dribbles her as she tries to collect it back (video)

A disrespectful student grabbed his teacher's wig in class while his classmates watched, then proceeded to dribble her as she tried to collect her wig back from him. 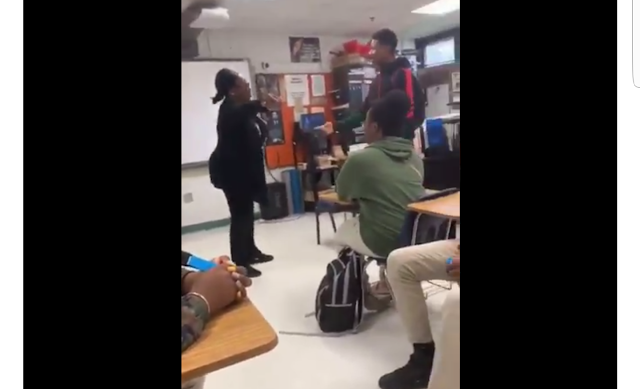 A student grabbed his teacher's wig in class while his classmates watched, then proceeded to dribble her as she tried to get her wig back from him.

The incident which occurred in LeFLore High School in Mobile, Alabama was between a boy who is reported to be a freshman and a woman who is a substitute teacher.

Read Also: 50 Cent goes hard on a woman who called on him on Instagram.

In the viral video circulating online, the teacher can be seen scolding the student before he reached for her wig.

The disrespectful student then runs to the back of the class and began dancing with the wig as his mates laughed and screamed.

His teacher who went after him to get back her wig was dribbled by the male student before running out of the class with her wig.

Students have reacted to say that the teacher had it coming due to the way she treats students and for refusing the boy to go to the bathroom after he seemed permission from her.

Watch the video below...