Suspect: Man Pretending to be a Woman Arrested for Scamming US Citizen of $230 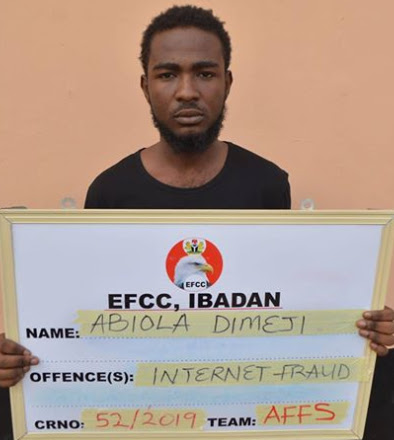 One of the charges preferred against him reads: That you Oladimeji Omotola Abiola ‘M’ sometimes in the month of January, 2019, at Ibadan, Oyo State, within the jurisdiction of this Honourable Court, with intent to defraud, did obtained by false pretense the sum of Two Hundred and Thirty United States of American Dollars ($230.00) from one Jeremiah Barber who resides in the United States of America, under the pretense that you are a woman named Jessie West, ready to marry him, which pretense you knew to be false and thereby committed an offence contrary to Section 1 (1) & (2) and punishable under Section 1 (3) of the Advance Fee Fraud and other Fraud Related Offences Act, 2006.

A statement released by the antigraft agency says the defendant pleaded not guilty to all the charges.
Prosecuting counsel, Adeola Elumaro, therefore, applied for a trial date and for the remand of the defendant in prison custody.

However, counsel to the defendant, A. D. Akinferan, told the court that he had a pending bail application on the matter, which he was yet to serve the prosecution; and thus prayed the court for a short adjournment to enable him do the needful.

Justice Abdulmalik adjourned the case to March 4, 2019 for trial and hearing of the bail application. The defendant was remanded in Agodi Prison Ibadan.