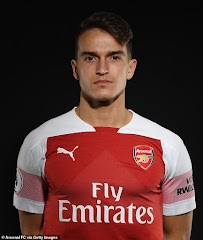 Arsenal have completed the signing of Denis Suarez on loan from Barcelona with an option to buy which will see them splash £20million on him.

Before moving to England, the 25-year-old Spanish midfielder signed a one-year contract extension with the Spanish giant, Barcelona.

Suarez who will wear the No 22 shirt for the Gunners had quite a lot a say.

"One thing no one knows about me is that when I was little I used to watch the Premier League on TV."

"Arsenal were a team that really inspired me. I used to watch Bergkamp and Henry - they're both legends of the club and hopefully we can follow in their footsteps."

"I've come here to play as much as possible and try to help the team qualify for the Champions League."

"I'd like to win the Europa League with Arsenal too - why not? It's a trophy I won under Unai Emery at Sevilla and I'd love to win it again here.'

"We are very happy that Denis Suarez is joining us," he said.

"He is a player we know well and I have worked with him at Sevilla."

"He brings us quality and options in many different attacking positions, so he'll be able to help the team," he concluded.

Suarez could make his debut on Sunday against former club Manchester City.