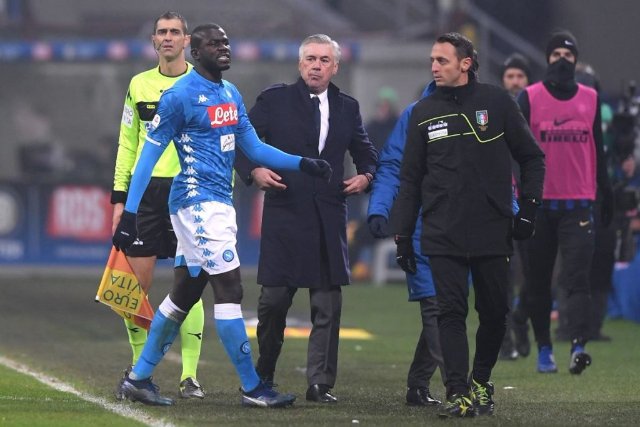 The Italian FA has handed Inter Milan a two match ban. The ban means, Italian giants will play their next two home league matches  behind closed doors and will also play a third match without opening the 'curva' section of the San Siro popular with fans known as 'ultras'.

This is as a result of the alleged racist abuse of Napoli defender Kalidou Koulibaly on Wednesday.

Napoli boss Carlo Ancelotti said he asked for the match to be suspended three times and that Koulibaly was targeted in the 1-0 defeat.

The Italian giants who are yet to appeal took to social media to speak against the act. Saying:

"The history of Milan is a welcoming one and together we are fighting to build a future without discrimination. Those who do not understand this history do not stand with us."
"From that night 110 years ago when our founders set us on our journey, we have always said no to any form of discrimination."

A supporter who was with a group of Inter Milan fans died after being knocked down by a van amid violence before the match in Milan.

Four Napoli fans were also hurt and one of them was stabbed, police said.

Racism in Italian football has become more like a formality and the Italian FA are putting measures to combat the abuse.

The mayor of Milan, Guiseppe Sala, also took to his Facebook page to apologised to Koulibaly, calling the abuse "a shameful act against a respected athlete".